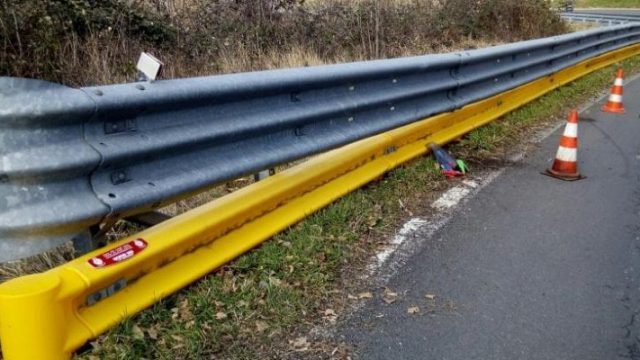 Guard rails are about to change, and do so for the better. A wonderful initiative from Italy is about to be voted into law, and it might be extended throughout the entire European Union.

The main subject is the modification that must be implmented in the construction of guard rails on certain road sections such as to make them less dangerous for motorcycle riders that com off their bikes.

The idea is as simple as it is effective. Basically, another guard rail made from an elastic, softer material will be added beneath the metal barrier at the side of the road, reducing the injuries sustained by riders (or passengers) that fall off the bike and slides into the rail.

These new barricades are to be installed under guard rails that extend more than 80 cm above the ground and are longer than 80 cm. Also, the eligible road sections must have a radius smaller than 250 meters, deemed as the critical radius limit for accidents.

Now, the interesting thing is that companies that manage roads in Italy will have to analyze the places where accidents involving motorcycles, scooters and mopeds took place. Local authorities will aid these companies by providing statistical data so that all critical road sections are properly identified.

Also, one of the crucial criteria that makes a road section a critical one is the occurrence of at least five deaths or injuries across three years in those areas. Certain types of intersections will also be included in the critical zone category and will receive the new guard rails, too.

However, after publishing the law text in the official bulletins, it will take six months for it to become effective, possibly to give road administration bodies the time to prepare the implementation of this (most welcome) safety measure. Given it’s early June already, a better timing could have been much more useful, but we’re not going to be too miserable with this. It’s great that it’s finally happening.

During a bike crash on a road with guard rails, motorcycle riders or passengers are very likely to hit the steel structures or their supports, becoming injured or even getting killed in the impact. While a guard rail can indeed prevent a car or a bike (and its occupants from sliding off the road into ditches or down mountain slopes), enough data has been gathered to proove that impact with any part of the said rails has a strong adverse effect, hence the new upcoming law.

It is still uncertain whether the new guard rails will be installed only in Italy or they will be adopted in the entire European Union (which we hope will happen). Stay tuned for more on the subject and stay safe!