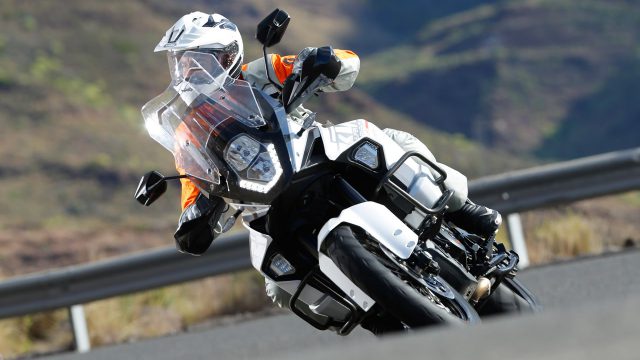 KTM is prospecting the introduction of automotive-derived technologies in the rider safety paradigm, with adaptive cruise control (ACC) and blind spot detection being the first items on the list. While we know that Team Orange will retain their inclination for pure performance, it’s not hard to understand that safety started to play an important role for the Austrians.

Bikes such as the 1290 Superduke R and 1290 Super Adventure introduced unprecedented amounts of rider aids that were also aimed at increasing the safety for both motorcyclists and other road users. From hill hold, traction control and anti-wheelie to the generic implementation of ABS in all Euro 4 bikes over 125cc, to high-tech stuff like electronic adaptive suspensions and cornering ABS, KTM was not at all shy to make their bikes as technologically advanced as possible.

It’s now time to see more safety-related gimmicks taking the step from autos to bikes. An array of sensors installed in the tail section of a motorcycle will scan continuously the blind spots and alert the rider when a vehicle is detected. Just like its automotive counterpart, this system will also involve warning lights integrated in the mirrors, possibly with another indicator on the dash.

Next in line comes adaptive cruise control, a feature that’s been exclusive to cars since its dawn. It looks like KTM found a way to integrate the radar in the “nose” of the bikes and hook it up with the vehicles’ CAN bus, allowing it to control the RbW throttle and make speed adjustments. Of course, allowing the adaptive cruise control to brake means that brakes would also need electronic actuation alongside mechanical force from a rider’s right foot and hand.

Adding servo control to the braking system doesn’t sound like much, especially as bikes such as the 2006 BMW R1200RT uses such a technology for both clutch and brakes. However, KTM must play their cards right, and keep an eye on the extra price for such equipment, because in today’s economy customers are becoming increasingly careful about how they spend their money.

Mattighofen is not the only maker envisaging the addition of automotive technology to the array of gadgets that make riding a motorbike safer. Ducati is most likely to announce similar measures for their top models in the coming months.

All in all, such aids re most welcome, but riding responsibly remains the key factor in avoiding getting into trouble in the first place. What’s your take on adding ACC and blind spot sensors to motorcycles?