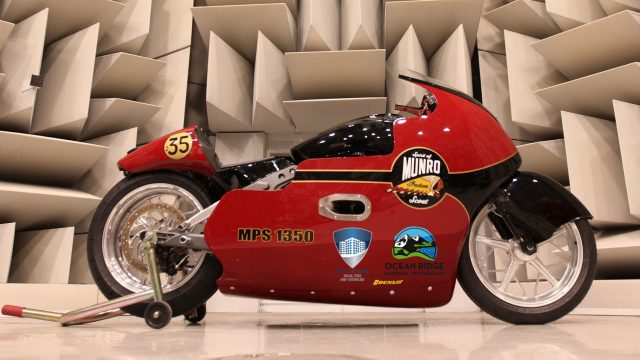 Indian Motorcycles and Lee Munro, the great nephew of the legendary Burt Munro return to the Bonneville Salt Flats in Utah this August in an attempt to break the 200 mph (321.86 km/h) barrier.

This year marks the 70th anniversary of the iconic Bonneville Speed Week and just over half a century since Burt Munro’s famed 1967 run. Lee will travel to the Salt Flats accompanied by a team of Indian engineers and the modified Scout named “Spirit of Munro” that will compete in the MPS-G (Modified Partial Streamliner) 1,350cc class.

Burt Munro’s legacy was also celebrated with “The World’s Fastest Indian,” a 2017 film starring Sir Anthony Hopkins as the legendary rider and depicting the modifications Munro himself made to the 1920 Indian Scout in his own workshop. As a fun trivia fact, it appears that, from the four bikes the film shows, two are “Munro Special” Indian Scout replicas, while the others are said to be Ducati.

The 2018 Speed Week will be held August 11-17 in Bonneville, Utah, and brings riders and teams from all over the world in search of a record and a unique experience in one of the most legendary places for speed runs.