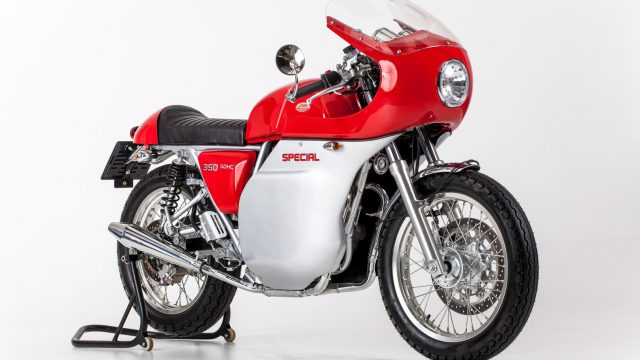 Former Czech motorcycle legend Jawa is back in the game under Mahindra stewardship, and showcases the 350 Special full-faired retro racer

Despite its name, there’s hardly something truly special about this new Jawa model. If anything, it harks back to Shineray’s classic machines the likes of the TT40 model sold in the UK under the brand name Mash.

The bike is almost identical to the versions released previously by Mahindra, save for the heavier build. The extra bulk comes from the ample fairing that surrounds the bike and the racing cowl that hugs the round headlight.

This twin breathes out through dual inverted cone silencers that are era-correct and look neat alongside the horizontal seat pan. The Special has a rear cowl inspired from the classic café-racers, and a rounded, bulbous front fairing that matches the bar-end mirrors for a sweet retro vibe.

It’s good to see that Jawa now comes with a 305mm disc brake in the front, adding some extra stopping power over the classic drum units that literally plague old motorcycles. The rear relies on the classic 160mm drum, which is hardly enough to balance the braking when riding a tad harder. The 18” wheels should offer decent steering, both on the countryside roads and in the city, also.

The Jawa 350 Special can only do 120 km/h (74.5 mph), so if you’re thinking about some road racing, maybe looking elsewhere would yield better results. Still, we spot an ABS ring on the front rotor, and this makes us think that Mahindra has plans to sell the Jawa 350 Special in Europe, also implying that the mill is Euro 4-compliant.

There’s no date announced for the European launch of the Jawa 350 Special, let alone the US. However, we might want to keep an eye on Mahindra, as they also bought the rights to the iconic BSA name, and interesting things may be coming our way shortly.

Customize your on Dainese race leathers down to details