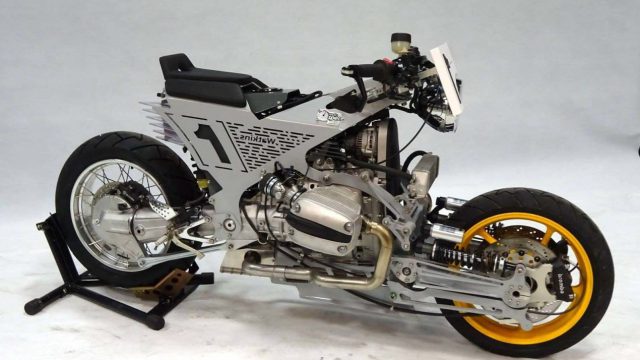 This engineering masterpiece will make you scratch your head

The custom motorcycle scene is continuously bringing up weird machines. The Watkins M001 is one of them. Actually, there’s something funky about this build-up that made us stare at it for hours. So the Watkins is more than your usual custom bike, it’s a combination of ingenious solutions and futuristic lines that is quite a wire-puller.

The man behind this astonishing project is Jack Watkins. He is established in Gdańsk, Poland where he works as a full-time engineer. The whole idea behind the Watkins M001 was built around the Harrier front suspension. It took around seven years for the bike to be build but the result is breathtaking.

The project is complex. The forces are analyzed, the kinematics checked, the material confirmed, the load calculated, drawings prepared, components ordered, online shopping done, the screws are counted… there is every aspect of industrial project inside.

Although Jack is an engineer, he didn’t have the experience or workshop to build the bike by itself, so he teamed up with Mateusz Kozlowski at Moto Spec in his hometown. The base ground for the bike was a BMW R1150RT that donated the engine, shaft and rear wheel. The front wheel came from a Yamaha XJ6, and the hub was milled to make room for the complex steering and suspension system. The frame was made out of two laser-cut sheets of steel and welded together. Every detail on the bike was first designed and checked in CAD before it went to production.

The biggest challenge was to fit the front wheel inside the complicated steering system. The whole assembly consists of almost a hundred components including eight roller bearings and ten sliding bearings.

“Despite all the technical problems related to the functional aspects, I wanted to keep it in a different form,” Watkins told BikeEXIF in an interview, and we couldn’t agree more. The Watkings M001 is the coolest piece of design we’ve seen lately, and we hope the creator will continue to build machines like these.

R1200GS on Ice and Snow. Not your ordinary Sunday ride

What about an electric adventure motorcycle? Zero Black Forest