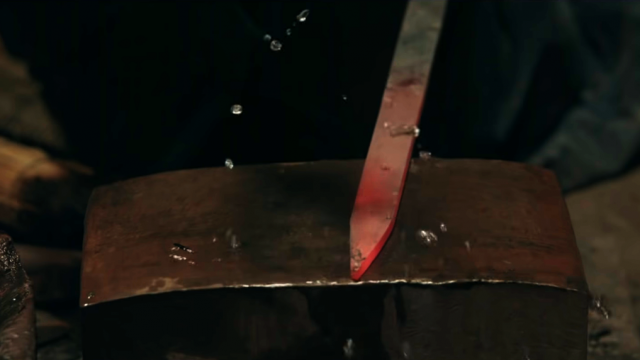 Suzuki has been burning the midnight oil to bring new machines to the streets this autumn, and their latest teaser is quite exciting. It relates to a new bike that will be launched this October in Germany, at Intermot, but that’s about all Hamamatsu is willing to share with us, at least for the time being.

However, as lackluster as info on this new bike might be, Suzuki have carefully chosen their symbolic language in order to make ideas sprout up in our minds. Namely, the short teaser depicts a lug of red-hot metal in a foundry, then a fresh blade being crafted, with hammers hitting it on the anvil, water quenching and all.

Now, it doesn’t take a semiologist to figure out that “blade” + “Suzuki” gives us “Katana,” one of Hamamatsu’s most appreciated sport bikes in history. Multiple bikes have been built under this particular badge, but it’s also been years since the last Katana made it to the showrooms. Things might just change this year, however…

In the absence of more info, we can only speculate and make wild guesses. Most of the opinions point towards a liter-class GSX-R bike, at least, for the beginning. Even so, since Suzuki are still making money off their 750-class sport bikes, we might get to see Katana kanjis on more than one machine.

Adding Katana once more to their roster in at least two flavors could make sense for Suzuki. Something tells us that smaller-displacement Katanas could become reality in the near future, as well. The entry-level sport segment is quite lucrative and there’s good money to be made with 125-300cc bikes in almost any market around the world.

Just remember how eager we all were when we were teens… Being able to ride a 300cc Katana sounded out of this world back then, but today, new riders would certainly be delighted to get such a machine. Looking forward to more teasers from Suzuki, as it turns out that they’re on a video spree.