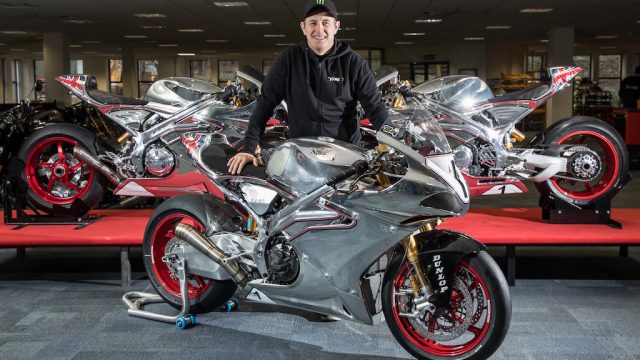 The iconic British manufacturer Norton joined forces with 23 time TT winner John McGuinness for the 2018 Isle of Man TT. The Morecambe Missile signed a deal with Norton motorcycles owner Stuart Garner last week, and he will team up with BSB champion Josh Brookes. Their machine for 2018 will be the Norton SG7, a race bike derived from the Norton V4 RR road bike.

The 2017 season was a bit sorrow for McGuinness. He missed the 2017 Isle of Man TT due to a broken tibia and fibula caused by a crash at the North West 200. Jhon is currently recovering and, he seems confident and ready to get back to his racing life.

I didn’t want to end my career due to an injury, but the truth is I didn’t know whether I would be able to come back as I didn’t know how fit I was going to be. Right now, things are going well. I feel a lot sharper and my head is in gear and ready to go. The plan is to get the external fixator cage off my leg by the end of this month and after that, we can start working towards getting bike fit and testing.

I’m definitely ready for a change of manufacturer. I needed an injection of enthusiasm and I’ve found it with Norton. From the first time, I met with Stuart (Garner) – the vibe was there and the passion. I watched Steve Hislop win the TT on the Norton in 1992 and it was massive. Everyone remembers that! We can’t get carried away, it’s going to be a big job but I’ve watched a lot of YouTube videos of the bike in action, I watched the bike out on track last year and it’s clearly a very fast and capable bike and I can tell you there are worse handling bikes out there too, so there’s no reason we can’t do the business if the stars line up right.

The Norton V4 RR SG7 proved to be the right package for a TT win. Josh Brookes pulled the sixth fastest time in last year TT. He lapped 130.883 mph on the 37.73-mile mountain course making him the fastest rider on a Norton in history. If McGuinness recovers his form before this year's race, the SG7 has what it takes to help him achieve a podium finish.

You can also read: The new Triumph Speed Triple is here

18 Months from now we will have an electric Harley-Davidson