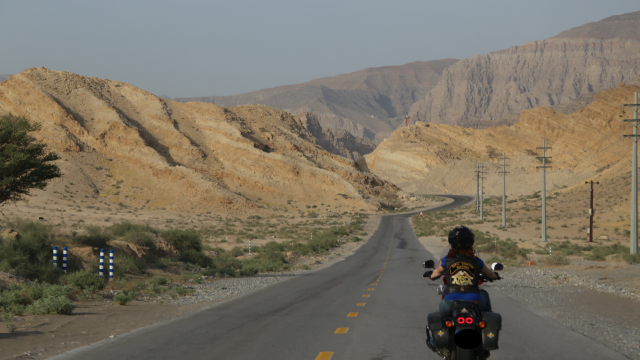 30,000 km covered so far and she plans to cover five and step on six continents

Violeta Ivanova (aka Holy Moto) is a psychologist, Human Resource Manager, and also president of Women International Motorcycle Association (WIMA). She has two daughters and she is riding her Harley-Davidson Fat Bob around the world. She started her trip last year in April. So far, the Bulgarian rider covered three continents – Asia, Australia, South America, a part of Europe and Middle-East and she’s still riding on her World Tour.

We wanted to find out more details about her world trip on a Harley-Davidson, so we asked her about what it takes to ride a motorcycle across all continents and the obstacles you have to go through riding so many miles. Violeta returned home after a journey through Colombia and plans to continue her World Tour once the travel restrictions are no longer in place. “The main purpose of my tour is to inspire women around the world to pursue their dreams because the most important thing is to dare to try!”

What is your World Tour route?

Next part has to cover Central and North America as I plan to fly my bike and myself from Toronto, Canada to Morocco, Africa and depending on the time and budget, maybe I’ll continue to Algeria and Tunis and after turn back to Europe, riding through Italy, Greece and Bulgaria or after Morocco, turn back to Spain, Portugal, Andorra, France, Monaco, Italy, Slovenia, Croatia and Serbia on my way back home.

How many miles have you ridden so far?

How do you prepare for such long journeys?

Except for paperwork and logistic preparation, most of the preparation is mental… I just accept the fact I am mortal, but I prefer to die doing what I really love than just dreaming about it. Planning the route or budget is something recommendable, but it’s not something you can really follow, that's my opinion.

What is the gear you carry along the way?

I am travelling with very few luggage. Have only two riding jackets, now only one, after the robbery. One winter and one summer jacket of HD. HD waterproof riding boots, summer and winter gloves of HD, kevlar riding jeans of Ugly Bros, Lazer Monaco 2 Carbon helmet. I use waterproof bags of Kappa and leather saddlebags of HD. Also, two action cameras GoPro and Insta360 and Quadlock stand for my phones.

What do you like the most riding your bike on such long trips?

Did you have any obstacles riding the Harley-Davidson on such a long journey?

The hardest part was the weight and low clearance of my bike, otherwise, we had a lot of fun with my Harley and I think we changed a lot of people perception, that HD is not a suitable bike for long-distance journeys.

I still hope to finish my circle around the World, covering 5 and stepping on 6 continents, which will make me the first woman, who made it on Harley-Davidson motorcycle… I didn't have almost any technical issues with my bike, except maintenance after the accident in India.

The bike struggled only once in South America, in Peru from the low fuel quality, but it was easy to fix in a couple of minutes. The other small issues were the gaskets of the forks, but again it’s just a usual service of the motorcycle, not something broken.

What happened in India? Were people helpful at that difficult moment?

The accident was due to bad roads in India. I was lucky that I just fell not crash with another car or animal! There was a road construction on the highway and the difference between the sidewalk and the new asphalt of the main road was around 40 cm… so the last thing I remembered is that we’re falling…

I woke up in the middle of the highway with a huge crowd around me. I was alone and had no clue where I am, but my friends in India made a special organisation to support me on the road, so they follow my route live on WhatsApp and my friend organised an amazing rescue operation for me!

My right wrist was broken, my chin was cut, my lips too, I was not aware that my jaw is broken in three places. When a friend called and told me he is coming and not to worry about anything I started to cry just because I couldn't believe how is possible that people are so kind, even if they didn't know me!!!

I flew back after a couple of days to Sofia, Bulgaria, where I had my jaw surgery and doctors fixed my wrist. I turned back on the road on the 23rd of September, exactly 3 months later after the accident.

Which is the most interesting country you travelled to and why?

India is very special, you can hate and love it at the same time. I found Malaysia as a country with a lot of potential for motorcycle travelling because you can find everything there: mountains, beaches, great people and food, and it doesn’t have crowded traffic as Thailand or Indonesia. Peru has diversity and challenges for bikers, but also great food and friendly people! I want to explore Ecuador more because of its amazing nature. I will explore Colombia more when I continue my tour after re-opening of the borders.

What did you learn from the people you met along the way?

That kindness and helpfulness are not a priority to any nation, but in the heart of people from every country and that if you are open and accept every person as a good human being you always get the same response! People are good in their nature, so we have to give chance to everyone to show his/her best side!

When do you want to finish your journey?

I planned to finish the full circle around the World in 6-8 months, but obviously, I faced so many challenges: accident in India, bush fires in Australia, robbery in Chile, floods in Peru, total lockdown and closing of borders… so I can't predict anything now and make a forecast about the end of my journey. But I hope, I will finish in 3-4 more months, so till now is 7 months already, and maybe 10-11 months in total!

Any plans for future trips?

I have a dream to make a world tour again with my older daughter, she also wants to ride a Harley, but that will be after a couple of years because she has to get first some experience.

Meanwhile, I want to ride in the Himalayas, Tibet and Yukatan and also want to step with my motorcycle on Antarctica, also I think about an Africa loop. But first I have to finish with my current tour, covering Central and North America, stepping in Africa and riding Europe on my way back home.

You can follow Violeta on her YouTube channel, holymotorbike.com and social media. Also, you can view the whole photo gallery by clicking on the main photo of the story.