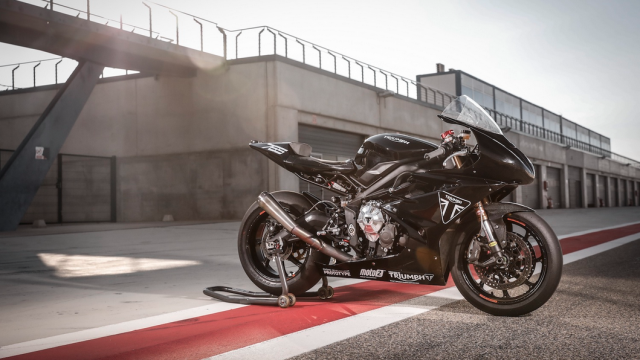 Triumph plan to show their Moto2 bike at the upcoming Goodwood Festival of Speed, July 12-15. Surprising as it may seem to see Triumph becoming the official engine supplier of the FIM Moto2 class starting with the 2019 season, things are on the move.

MV Agusta already announced that they’re making a historic comeback to Moto2, using Triumph’s engine and their own chassis, teaming with Forward Racing and hoping for the best. Remains to be seen how other chassis makers will get along with Triumph’s power plant…

The mill is the Street Triple 765cc in-line triple which will receive some road racing-inspired modifications bringing up both power and torque figures to a rumored 133 HP and some 80 Nm, most likely going a bit higher in the final trim. As far as the Triumph that will be showed at Goodwood goes, rumor has it that we’re going to see the body of a Daytona 675 with the Street Triple engine bolted to it.  It’s everyone’s guess how the actual Moto2 machine will look in Triumph’s vision; the 2019 pre-season tests are still more than half a year ahead, and many things are yet to come.

At Goodwood, two iconic road racing icons are going to throw a leg over Triumph’s Moto2 machine. Former WSBK and MotoGP rider Carl Fogarty will ride the Moto2 machine alongside TT winner and racing star Gary Johnson, but these nice fellows will also be astride other Triumph bikes.

The list includes a 1970 Works 750 experimental model that won the 24-hour Bol D’Or that year, and a ’71 works 750 that was used by Mike Hailwood and Ray Pickrell in the Anglo-American Cup, Isle of Man TT and UK Superbike Cup. These three machines will be joined on the track at Goodwood by Triumph’s current Speed Triple RS bike.

READ MORE on road racing: MV Agusta back in Moto2.