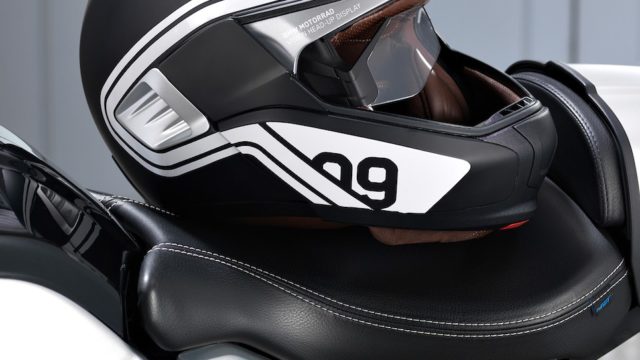 BMW Motorrad is developing a head-up display system for its helmet range. The helmets could have a head-up-display system, two video cameras and speaker systems.

It’s the first time when a famous company develops a head-up-display helmet. Or the second time, if you also consider a project (with a 4k video camera but without HUD) launched by Bell at the same time. The other few models sold until now on the market are created by some small/start-up companies.

The BMW Motorrad concept was revealed at CES Las Vegas and might hit the production line in two or three years.

In fact, BMW created a HUD system, not a helmet so that system could be fitted on any BMW Motorrad helmets. The display is not projected on the visor, but on a piece of glass located in the front of your right eye – something like Google Glass. The information on the display can be controlled via that left-handlebar wheel which can be found on the more expensive BMW motorcycles.

The whole idea is to create a multimedia universe which consists of the display, your smartphone and BMW Motorrad Navigator (which is able to get information from the bike).

BMW Motorrad’s smart helmet also features two video cameras (one in the front and one in the back). The front can be used as a video recorder while the back could be transformed into a digital rearview mirror.

By now, the most advanced helmet on the market is Skully AR-1, which has an 180 degrees blindspot camera and head-up display. Its price is $1,500.