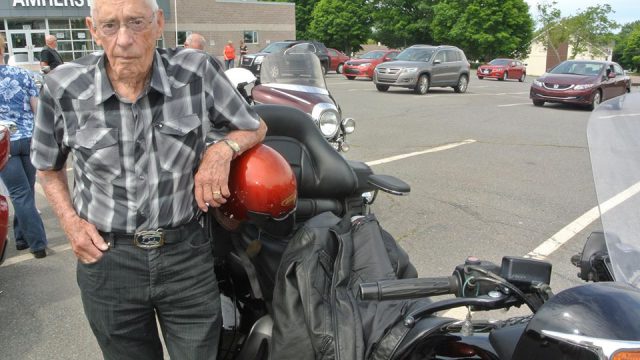 Meet one of the oldest active riders in North America

“Don’t buy a motorcycle because will get you killed.” Really? Our guy wouldn’t agree to this stupidity. He’s turning 100 this year, update: he just turned 100 and he might still be able to ride. We just talked to the guys at the  Bordertown Biker Bash, a motorcycle rally in Amherst Nova Scotia held in July, and they confirmed that Wymann Betts could lead the motorcycle parade again. It would be just a month before he turns 101.

However, there are some concerns about his ability to ride a motorcycle. There is talk about him either riding in a sidecar or antique car. However, he's proably the oldest guy in America to be able to ride.  The secret: “not thinking too far ahead”, he says.

“Bun,” as his friends call him, has been riding motorcycles for more than 50 years. He started his life on two wheels riding a scooter – it was easier for him to commute to a nearby sawmill. He traded a lot of bikes, and the last one he bought is a 2003 Honda Gold Wing he’s still riding. "When it's moving about 15 km/h … everything goes fine, but it's heavy," Wyman "Bun" Betts told CBC's Information Morning a couple of years ago.

“I’ve just never grown up,” he also says – which seems to be a great strategy when fighting with age.

Before riding motorcycles, Mr. Betts had another uplifting passion: flying. It was in the early 1970s when he bought his plane – a Cessna 172 which he sold when he was 80. “We’d just fly around here. You see all the lakes and rivers and where they go. Surprise you, the amount of little ponds and things there are around the country when you can see a dozen at a time,” Wymann Bun Betts says in an interview for a local blog.

“He never drank, he never smoked, and he doesn’t worry,” Jean Wood, his companion says in the same interview.