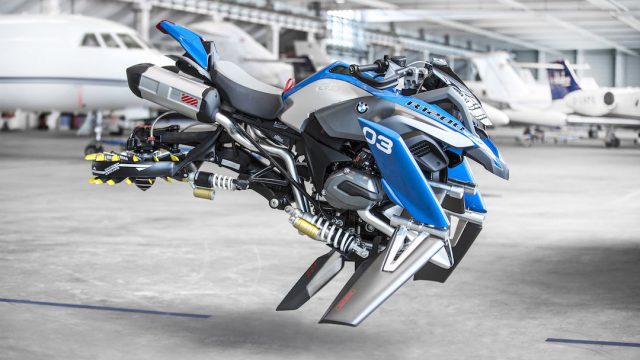 The design teams of BMW Motorrad and Lego Technic created an alternative model as is commonly provided with the 2-in-1 kits.

“It was a great idea and a superb creative challenge to develop a fictitious model from the parts of the LEGO Technic BMW R 1200 GS Adventure set. Our concept not only incorporates the BMW Motorrad design DNA with typical elements such as the boxer engine and the characteristic GS silhouette, it also draws on the LEGO Technic stylistic idiom,” says Alexander Buckan, Head of BMW Motorrad Vehicle Design.

Moreover, The Hover Ride Design Concept came about as a result of the involvement of the BMW Junior Company Munich, an innovative training unit in which BMW trainees from diverse departments have the opportunity to work together in projects entrepreneurially. BMW trainees in the second to fourth year of their course used the serial-production parts of the BMW R 1200 GS Adventure to build a life-size model of the LEGO Technic Hover Ride.

Numerous components – such as the front-wheel rim modified to form a propeller – were specially made for the project.

Epic Travel in the Caucasus on BMW R1200GS

You can spot the authentic Telelever front-wheel suspension, the shaft drive and the moving two-cylinder boxer engine. It’s the first Lego Technic model to be created in cooperation with a motorcycle manufacturer.

The full-size model of the Hover Ride Design Concept was presented for the first time at LEGO World in Copenhagen on 16.2.2017.