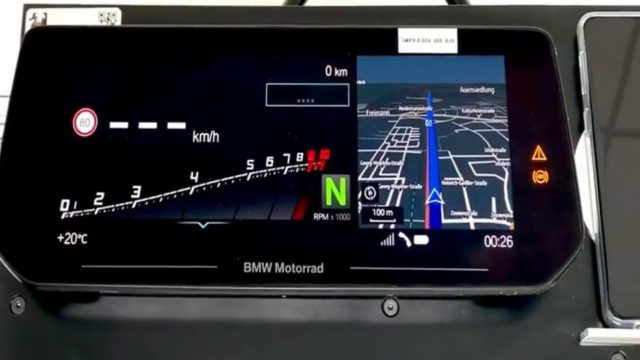 The new BMW Motorrad Connected display will offer a built-in navigation system via the Connectivity App installed on the smartphone, according to an official sneak peek of the new product. This will replace the turn-by-turn navigation currently used on the BMW TFT Dash.

This new product will make the standard GPS obsolete, thanks to the offline maps and to the user-friendly nature of the smartphone app. The sneak peek was revealed in the “RideAndTalk” BMW Motorrad podcast.

Looking at the size and the shape of the new BMW TFT Display, we think that it will debut on the touring segment, and not on the GS. The R1250RT and K1600GT series are featuring some old-school analog dashes, and BMW will probably introduce this new one pretty soon. More than that, it looks too wide to fit other models such as the R1250GS, R1250R/RS or S1000XR, F900 series, and so on.

Moreover, the whole BMW range excepting the G310GS/R and the touring series are already fitted with the first generation of the BMW Motorrad Connectivity Dash, which offers the turn-by-turn navigation.

How does it work? You have to download the free smartphone app, tho connect via Bluetooth, and to set up the destination on the smartphone. The TFT Dash is taking over the information and shows you the guidance (it also features audio guidance). Of course, you can also listen to music and make calls.

For safety reasons, it probably won’t feature a touchscreen and will be controlled via the jog-wheel on the left handlebar. It also doesn’t seem to have Apple CarPlay and Android Auto.

18 thoughts on “This Is the New BMW Motorrad TFT-Display”