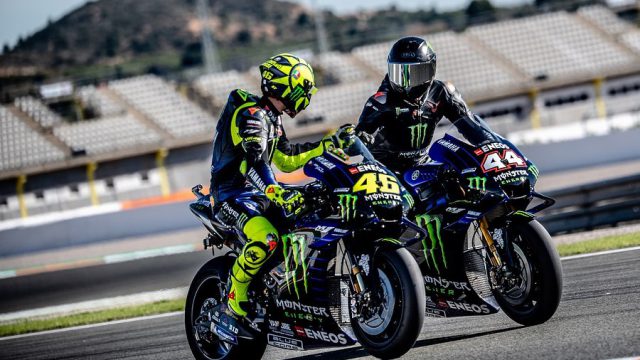 “Swapping rides with Rossi was epic guys! Best day ever”

MotoGP legend Valentino Rossi and Formula 1 star Lewis Hamilton tried each other’s machines at the Valencia racetrack. It's a PR action made by Monster Energy and the teasing started last week: Lewis Hamilton and Valentino Rossi posted some messages on Social Media saying that they will swap machines. The test was held in Valencia, Spain on Tuesday, 10th of December. Curious about what happened? Watch the video below.

Valentino was the first on track and after he drove the Mercedes 745kW F1 car of Lewis Hamilton he said:

"It is difficult because you don't see very much so the beginning was difficult. After some laps, you start to understand better."

"Swapping rides with Rossi was epic guys! Best day ever," said Lewis Hamilton at the end of the day.  "The wind is very difficult. At speed, in the corners, the bike shakes all the way. I think it is the wind."

Valentino Rossi is a regular contender of the Monza Rally Show, an event held annually on the famous track and he has seventh wins. He also is passionate about rally cars. Lewis Hamilton is an MV-Agusta enthusiast and rides an MV-Agusta Dragster RR LH44 at the Formula 1 races. He has three bikes named after him by MV-Agusta, the Brutale 800 RR LH44, the Dragster RR LH44 and the F4 LH44.