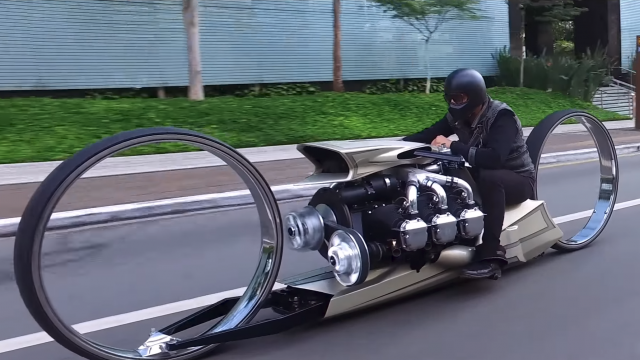 Motorcycles powered by aircraft engines are not a new thing, but the TMC Dumont is by far one hell of an eye catcher. If not for the noise and the humongous engine, the ultra-low profile and the insane, huge hubless wheels will make more heads turn than any other custom machine we saw in a while.

This uncanny motorcycle was conceived and built by Brazilian former F1 driver Tarso Marques, and its name pays tribute to one of the country’s aviation pioneers, Alberto Santos-Dumont. The TMC Dumont enjoyed quite a lot of hype at the recent Daytona Bike Week and received the “Best in Show” award, as well, which is no surprise, given how striking it looks.

At the heart of the TMC Dumont lies a Rolls-Royce Continental V6 aircraft engine. With a power rating of 300 HP, the Dumont is sure to be a blast to ride, albeit its minuscule ground clearance would make it impossible to enjoy through the twisties. The same power plant from the ‘60s can even be found in some Cessna airplanes, by the way. Not sure how and if such a monstrous machine would ever get emissions approval around the world, but we believe Tarso Marques has no solid plans to turn this project into a commercial model.

The massive 36” cast wheels have no hubs and blatantly show off their negative space that plays such a strong part in the visual appearance of the bike. Their extremely low profile probably account for some rough time in case the road is anything less than perfect, but it looks like riding this amazing creation is well worth the effort.

Frankly, we just wish Tarso Marques delivers more outrageous machines in the years to come, as it appears that he already has what it takes to become a new star in the custom motorcycle segment. Watch the build video after the jump and prepare to be amazed.