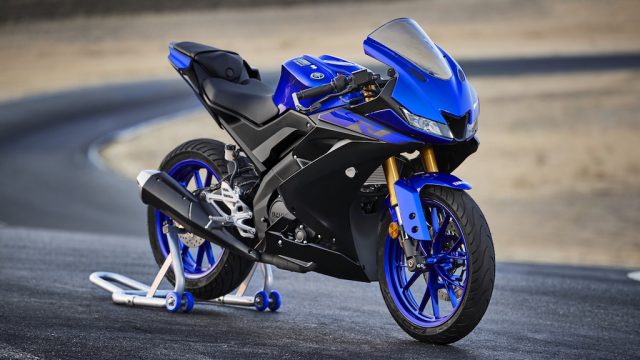 The small displacement motorcycles market is booming right now. There are more and more bikes models to choose from if you are 16 and you want to start your riding career. The guys at Yamaha came up with a brand new bike, the YZF-R125 which they claim is the most sophisticated 125 design they’ve ever made. This might be true considering the bike comes with some innovative engine solutions and R1 looks.

The Japanese manufacturer goes back with the 4-stroke 125 for more than ten years now, so it was about time they came up with a fresh new bike. The 2019 YZF-R125 is a completely new story that comes up with a very cool solution in regards of power delivery. The new engine features a Variable Valve Actuation that delivers a lot more low and high rpm torque that translates to faster acceleration, increased top speed and better fuel efficiency. There are some R1 touches made like the inspiration to build a wider throttle body similar to the one on the R1 to get more throttle feel and a cool engine noise.

Even though the engine is just a 125cc single-cylinder that delivers only 15hp this bike might feel a lot better than its peers. The variable valve timing is a cool solution that we’ve witnessed a lot in the motorcycle world for the past three years. Suzuki introduced the system on their superbike, Ducati on their Multistrada and now BMW on their big ADV bikes. This means Yamaha is just saluting this technology and we will see it on future models.

The YZF125 features a revised frame for a bit more rigidity and new swingarm to stiffen things up at higher speeds. The fuel tank is also new, and it can handle 11 litres of fuel, almost like the new Suzuki Katana. The wet weight figure stands at around 142 kg putting it between the lightest in its range.

The looks are inspired by its bigger brother the YZF-R1 superbike with aggressive lines and LED lights and to make it even more badass the rear tire is a bit bigger than on the usual 125 bikes. We don’t know the price yet but considering the old YZF-R125  was around $5000 we expect the new YZF-R126 to go for the same money.