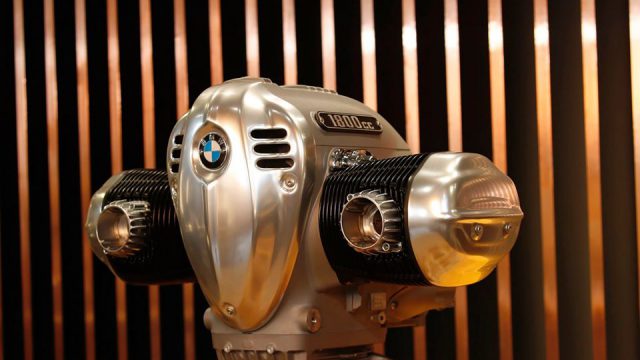 The BMW cruiser comes with about the same torque as a Harley-Davidson Milwaukee Eight powered motorcycle – 158 NM at 3,000 rpm. The Harley-Davidson’s engine output is 150 NM at 3,250 rpm. While the Americans are never mentioning the horsepower, BMW claims 91 hp at 4,750 rpm.

For those living outside the motorcycle world, BMW is entering the big-cruiser segment, with the R18 platform. Everything is based on the air-cooled 1,802 cc engine, the biggest boxer engine in BMW’s history.

The Big Boxer features an OHV valve drive and a separate engine and transmission housing and the cylinders come with 107.mm bore and 100 mm stroke. More than 150 NM of torque is available from 2,000 to 4,000 rpm – enormous pulling power. BMW also mentions a “generously sized flywheel mass” that ensures “running smoothness”.

The big boxer weighs 110.8 kg, including gearbox and intake system. We’re curios about the final result – the total weight of the bike.

The R18 concept first appearead at the Concorso D'Eleganza Villa D'Este earlier this year, being a classic interpretation of the cruiser engine. Later this year, at the EICMA, BMW unveiled the R18/2, which features a more modern approach. The final version is expected to be unveiled in 2020.

More than that, the new Boxer features an anti-hopping clutch and six-speed transmission. For those of you more interested in the way it’s built and its resemblance to the past, here’s the BMW press release info.

Although the new “Big Boxer” has four valves, dual ignition, a modern combustion chamber architecture, intake manifold injection and the BMS-O engine management system for the best possible torque as well as optimum consumption and emissions, it uses the classic OHV configuration for its valve drive – as was the practice pursued by BMW Motorrad over a period of some 70 years.

When developing the valve drive for the “Big Boxer”, BMW Motorrad engineers were inspired by a very special engine design in the history of BMW Motorrad – in keeping with the Heritage concept: the 2-cylinder boxer engine of the R 5/R 51 (1936 – 1941) and R 51/2 (1950 – 1951), the latter having been the first BMW motorcycle with a boxer engine after the Second World War. In contrast to other OHV designs by BMW Motorrad, this engine – highly valued by connoisseurs – has two camshafts driven by the crankshaft via a sleeve-type chain.

As in the historical role model, the two camshafts are also positioned to the left and right above the crankshaft in the “Big Boxer”. The advantage of this “twin camshaft boxer” is the shorter pushrods. This also makes for reduced moving masses, minimised deflections and lower linear expansions. A generally stiffer valve drive with improved control precision and higher speed stability is the consequence of this more elaborate construction.

In the traditional BMW Motorrad boxer design, the two pushrods actuate one pushrod per cylinder side for the intake and one for the exhaust side, guided in a sealed pushrod tube on the top of the cylinders. The two intake and exhaust valves in the cylinder head are actuated in pairs via fork toggle levers.

In contrast to today's widespread engine technology, valve clearance compensation is not effected by means of hydraulic elements, but – as was the case in most classic air-cooled BMW two-valve boxers for decades – via one adjusting screw with one lock nut for each valve. As was formerly the case in the classic 2-valve boxers, valve clearance adjustment (0.2 – 0.3 mm) in the R18 “Big Boxer” is also achieved very quickly. The valves are made of steel, with a disc diameter of 41.2 mm on the inlet side and 35 mm on the outlet side. The valve angle is 21 degrees on the inlet side and 24 degrees on the outlet side.

As in most BMW Motorrad boxer engines for decades (with the exception of vertical-flow, air/water-cooled boxers since 2012), a single-disc dry clutch transmits the torque generated by the engine to the transmission. For the first time it is designed as a self-reinforcing anti-hopping clutch, thereby eliminating unwanted stamping of the rear wheel caused by engine drag torque in the event of hard downshifting.

The constant mesh 6-speed transmission is located in a dual-section aluminium housing and is designed as a 4-shaft transmission with helical gear pairs. The gearbox input shaft with lug dampers drives the two gearbox shafts with the gear wheel pairs. An output shaft is provided to bridge the distance and reverse the direction of rotation. A reverse gear is available as an optional extra. This is driven by an intermediate gear and an electric motor and can be shifted manually.

Open secondary drive based on the classic role model

As in all BMW motorcycles with boxer engines, torque is transmitted from the gearbox to the rear wheel in the R 18 via a propeller-shaft or universal-shaft drive with universal joint, shaft and rear-axle drive with bevel and ring gear. The propeller shaft and universal joint are examples of fascinating classic motorcycle technology since they are nickel-plated and open, as was commonly the case in BMW Motorrad models up to and including model year 1955. A so-called tripoid joint is applied on the gearbox side for the purpose of length compensation.