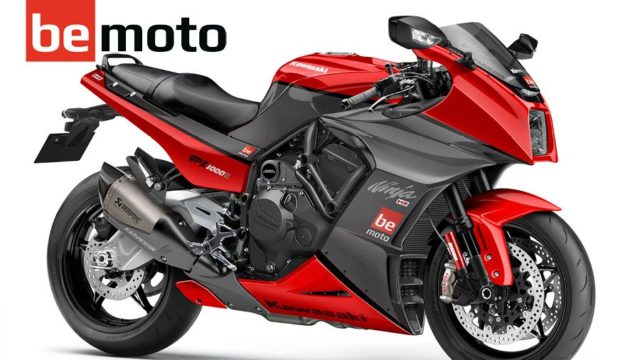 Kardesign made a motorcycle sketch for Be Moto of a reinterpretation of the infamous Kawasaki GPZ900R we’ve seen showcased back in the ’80s in movies like Top Gun. This is the Kawasaki GPZ1000R and it features a supercharger and components from the company’s H2 platform.

Don’t get your hopes up high because this is just a moto design rendering, so what you see in the pictures is not a real bike, but Kar Lee’s of Kardesign design rendering and we have to say it looks awesome. And that’s not all. Last year, in December, Kawasaki made a video on their official YouTube channel of their former GPZ900R showcasing a timeline with all the generations of their model throughout the bike’s 20 years production run, starting from 1984 to 2003. Thus, Kawasaki fueled the rumour that the GPZ900R could make a comeback.

Perhaps, the purpose of that video release was to mark the arrival in cinemas of the new Top Gun: Maverick movie which should have hit the movie theatres this summer. Unfortunately, the movie release was delayed six month due to the Covid-19 pandemic. We all remember how Tom Cruise rode a GPZ900R model back in ’85, in the first Top Gun movie which was perhaps one of the coolest things the actor did in his movie career.

Now, Kardesign takes things further and made an interpretation of what we could expect from a next-generation GPZ900R if Kawasaki will ever decide to make a rebirth of their iconic motorcycle. Meet the Kawasaki GPZ1000R. It’s fitted with all the old school goodies like the retro style bodywork, but Kar Lee added a couple of tweaks we find very interesting. To start with, there is a new trellis frame, latest generation Showa suspension like we see on the production superbike – Ninja ZX-10R SE, Brembo brakes with radial calipers on the front, Akrapovic exhaust system and a supercharged 998cc inline-four.

It might be a long shot to see a supercharged GPZ model if this motorcycle design rendering we’ll ever be considered by Kawasaki as a production model, but back in the ’80s, all four Japanese motorcycle bike brands had turbocharged machines including the GPZ900R. Furthermore, Kawasaki started their supercharged H2 platform with the Ninja H2 hypersport bike, track-only Ninja H2R and after, added to their motorcycle range the Ninja H2 SX sport tourer and the Z H2 supernaked. So, one supercharged model for each motorcycle segment.

Kawasaki made a rebirth of their 1970s Z model in the form of the Z900RS neo-retro bike. On the other hand, Suzuki also made a comeback with their 21st century Katana model. So, if Kawasaki will build a next-generation for their GPZ900R bike is anyone’s guess, but we would surely like to see this Kawasaki GPZ1000R moto design rendering come to life in a real production bike.