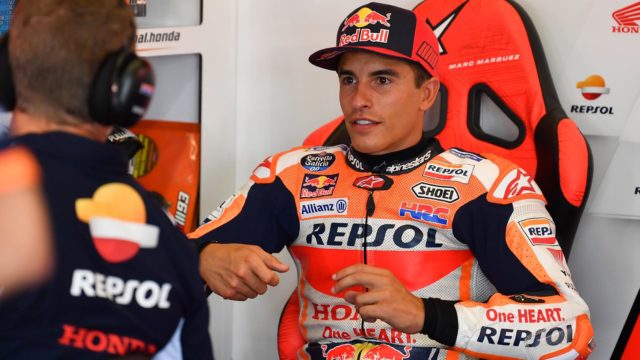 According to Spanish newspaper El Periódico, Marc Marquez could race just 4 days after he had surgery to recover from his fractured humerus suffered as a result of a high-side last weekend at the MotoGP race held at Jerez.

It looks like Marc Marquez could ride at the third round of MotoGP which is held between July 24-26. This means that the Spanish rider could be back on his Repsol Honda MotoGP bike less than 48 hours since he had to plate his fractured right arm. According to the Spanish newspaper, Marquez is already on his way to the Jerez track to convince the MotoGP doctors that his physical condition is good enough to allow him to race on Sunday. Bear in mind that Marc Marquez had surgery this Tuesday (July 21) performed by doctors Xavier Mir and Sergio Barrera which fixed the rider’s fractured right humerus with an insert and Titanium screws.

The good news for Marc Marquez was that the crash did not damage his radial nerve, thus, there was no treatment required. The radial nerve helps the wrist movement, fingers extension, allows the thumb to grasp the handlebar, the index and middle fingers help with pushing the gear lever, while the ring and little finger allow to grasp the handlebar and use the bike’s acceleration. Therefore, the radial nerve is essential for racing a motorcycle. Taking all these into count, with the radial nerve intact, and if Marc Marquez is allowed and considered medically fit by the MotoGP doctors, there’s a strong chance we’ll get to see the Spanish rider race this Sunday at Jerez.

The goal is to gain some points in the MotoGP standings to the rescheduled calendar which features fewer races than in 2019. So, every point counts if Marc Marquez wants to become the 2020 MotoGP champion. After, the Spanish rider will go through the medical check-up at the Jerez track, he’ll receive the result if his fit or not to race on Sunday. Therefore, more news will follow regarding this matter.

Marc Marquez suffered a high-side on the exit of Turn 3 and had a heavy crash last weekend at the Jerez race. He suffered a fracture to the shaft of the humerus and had to fly to Barcelona on July 21 for surgery to his broken right arm. After the surgery, Doctor Xavier Mir was considering that the Spanish MotoGP rider will have to go through a recovery process which could have lasted between three to four week if the rider’s health condition got any worse.