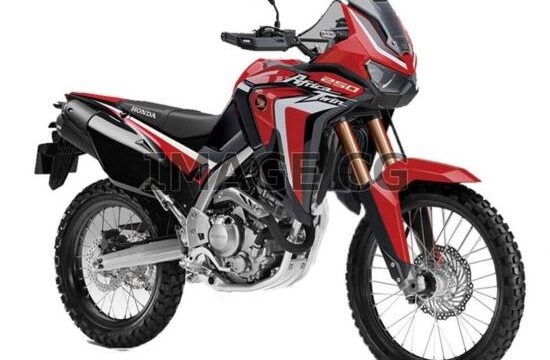 At the moment it’s just an interpretation and the adventure motorcycle featured in the photo is just a design rendering, so, for now, it’s just a rumour as we’ve seen that Honda could be working as well on an 800cc version of the Africa Twin. Moreover, starting from January 1st 2021, all motorcycle manufacturers we’ll have to equip all their new models with Euro5 compliant engines as the regulations will demand it, thus a 2021 Honda Africa Twin 250 might not be just a design rendering. Honda could be revising its current CRF 250 Rally and convert the adventure motorcycle into a version closer to the features of the Africa Twin 1100 model and by doing so, the company would have a small adventure motorcycle in a segment where at the moment it is absent.

As far as the Honda Africa Twin 250 design rendering goes, the new model could not be all that adventure orientated as it may lose its 21-inch front wheel in favour of a 19-inch one in order to offer more road and touring characteristics. It might not be far fetched that if the Africa Twin 250 becomes a real motorcycle, Honda could offer two versions – one with a 19-inch front wheel focused on touring and another with a 21-inch front wheel and adventure components. The power delivery could remain the same as the current one – 24.8 hp. The bodywork would most likely follow the current Africa Twin design lines and be fitted with similar headlights, fairings, fenders and a more high mounted fuel tank.

For now, it’s just a motorcycle design rendering, so we’ll have to wait and see if Honda has any plans on building an Africa Twin 250 in the future.