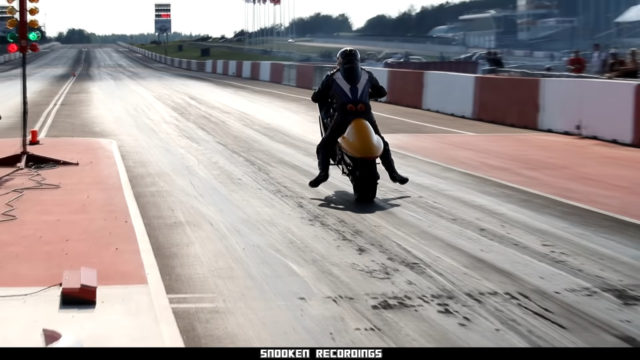 When we think of drag racing and especially a Suzuki Hayabusa it sounds like blasphemy to think it’s an electric motorcycle. Even when we look at Guy Martin’s 800hp Busa or 434kph (270 mph) machine, the motorcycle is fitted with a petrol engine. Not in the case of this Forklift-Powered Electric Suzuki Hayabusa which is faster on a quarter-mile race than a Bugatti Chiron.

The video comes from Snooken Recordings and according to them what we see here is an electric converted Suzuki Hayabusa designed to break a Quarter Mile World Records. Furthermore, the motorcycle drag race quarter-mile time is 9.3 seconds which is much quicker than the Bugatti Chiron 10.1 seconds time. Unfortunately, the hypercar is not in this video, but the figures of the electric Suzuki Hayabusa are quite impressive nevertheless.

The motorcycle is manufactured by a Danish racing team which tweaked the bike and converted it into a drag racing machine. It was designed to race alongside combustion-engined drag bikes in Denmark. Unfortunately, that class was removed the same year the electric motorcycle was manufactured. So, now, the team seeks to break World Records around the globe instead.

The electric Suzuki Hayabusa features a modified drivetrain, chassis and extended the wheelbase with ten inches compared to the stock version. Moreover, the motorcycle is lighter than the stock Busa thanks to the switch between the electric power unit and petrol engine. Thus, the bike only weighs 361 pounds (164 kg) which is a lot less than the 586 pounds (265 kg) of the stock version.

Speaking of the electric power unit, the Suzuki Hayabusa is fitted with a forklift motor (in other words an electric truck motor) delivering 1300 amps and 200 volts. Thus, the electric Busa makes 200 hp while the maxim output lasts between four to six seconds, enough for a 9.3 seconds quarter-mile time. Compared to a standard Suzuki Hayabusa power and weight figures (180 hp -190 hp and 230 kg race-ready), this electric motorcycle is lighter and more powerful although it’s not quite among the fastest quarter-mile bikes in the world. Although other bikes are faster, this electric Suzuki Hayabusa holds nine world records in its 200-volt class, but according to the manufacturer, this class no longer exists.